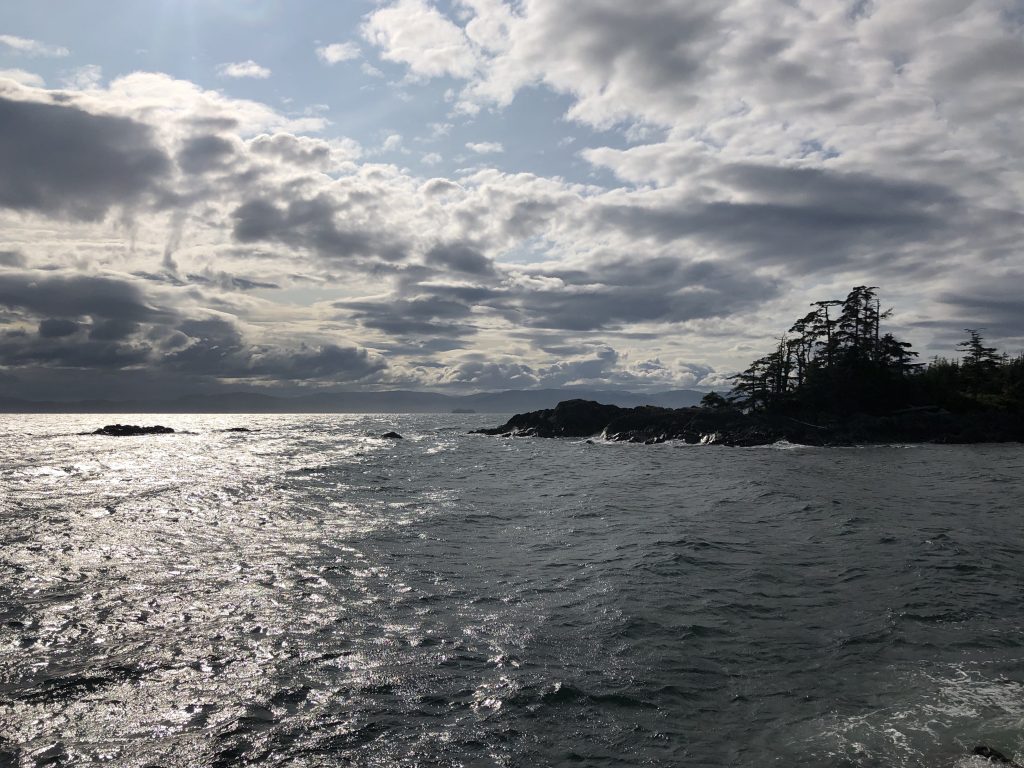 DAVE POINTED TO THE DARK MASS OF CLOUDS over Anan Lagoon to the south and said in classic meteorological understatement, “It’s going to rain in about an hour.”

I hadn’t been been paying attention to the weather. Osprey was snugged into a little cove in front of the Anan Bay cabin, tied to a Forest Service float. Very protected. Dave was starting dinner. A floating Forest Service rangers’ cabin was anchored to our south, further out into the bay.

Then the wind hit—more suddenly than anything I’ve experienced, transforming the cove in seconds from a flat calm duck pond to a churning, frothing washing machine.

The float was bucking like a terrified horse, and Dave bravely climbed out of our boat and onto the pitching platform to tie down our kayaks, which were about to blow away. Then he quickly climbed back into Osprey. And we just watched. 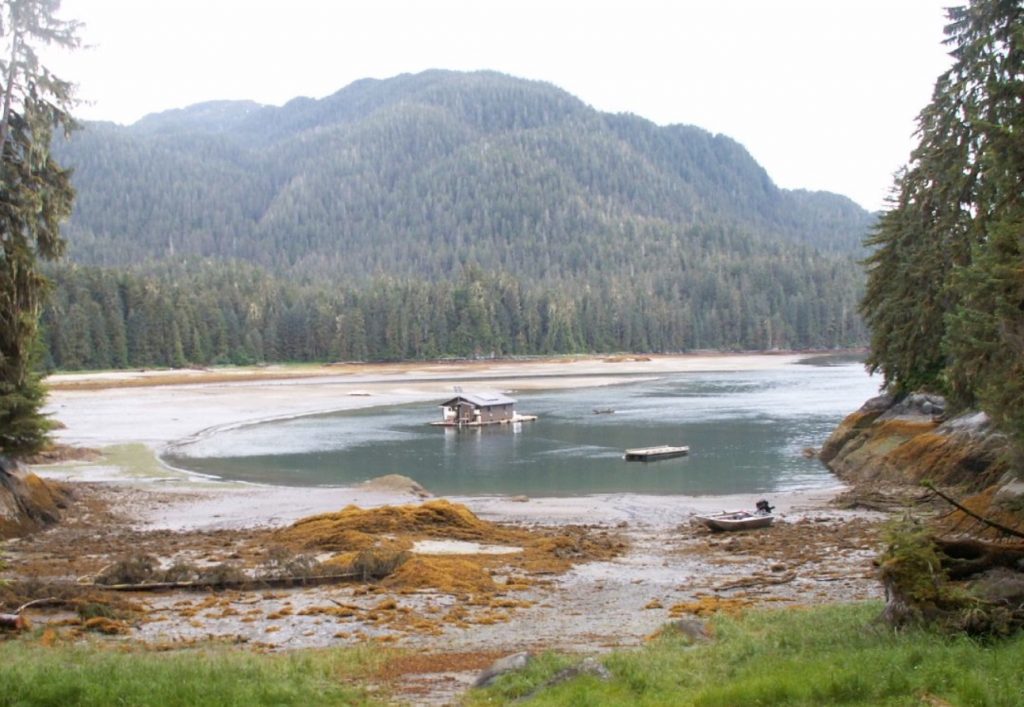 It was remarkable: although there were only a few feet of fetch—the distance over which wind blows without obstruction to generate waves—a white line of two-footers marched across the narrow cove, slamming into the float. It happened too fast for us to be afraid; we were awestruck.

For less than a minute the wind seemed to slacken … and then the rain came, in sheets, sideways, obscuring everything around us. I bet it dumped two inches in less than three minutes. And then, as quickly as the storm had blown in, it was calm again.

But something was different, and it took a little while for us to realize what it was. The float to which we were tied was closer to shore; and the floating rangers’ cabin, which had been well to the west of us before the storm hit, was now less than 100 feet away. 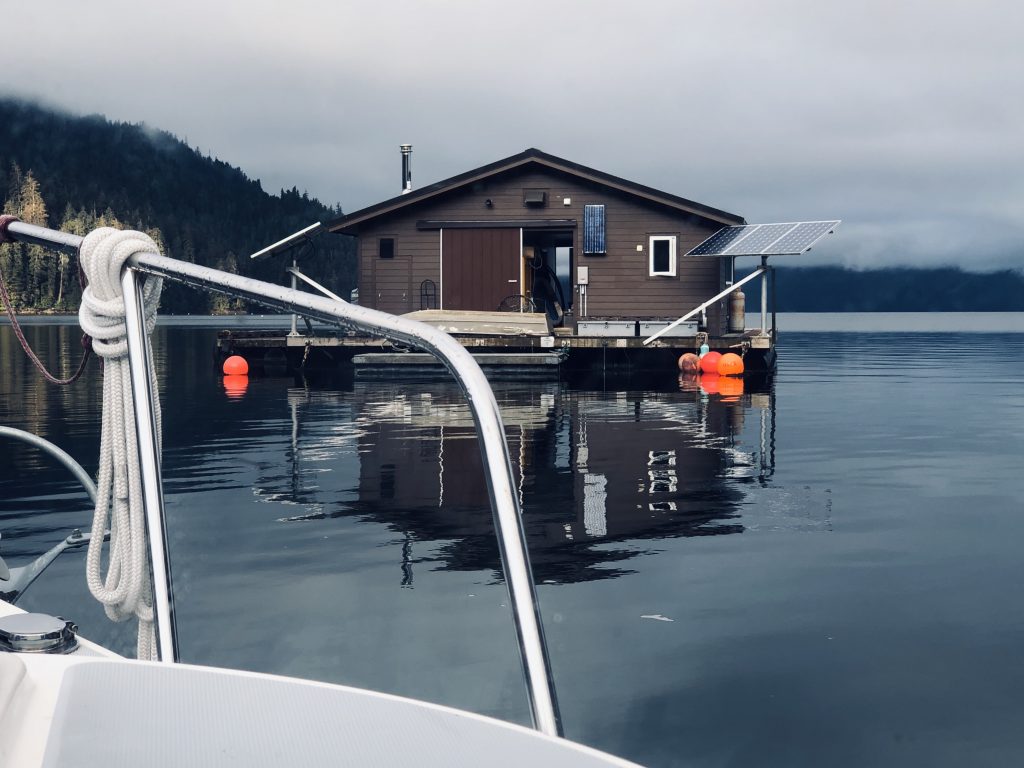 We called the floating cabin on our VHF radio. The three Forest Service employees aboard—who now appeared to be anxiously evaluating the cabin’s new position—confirmed that all four of the cabin’s anchors had dragged. And from their vantage point, it seemed clear our float’s anchors had dragged as well. They told us they thought their anchors had finally dug in … but we all kept close watch through the night, just in case.

The next morning we made a quick trip to the Anan Bay bear observation station—no grizzlies and only a couple of black bears. There were salmon in Anan Creek, however, and the bald eagles were thick. 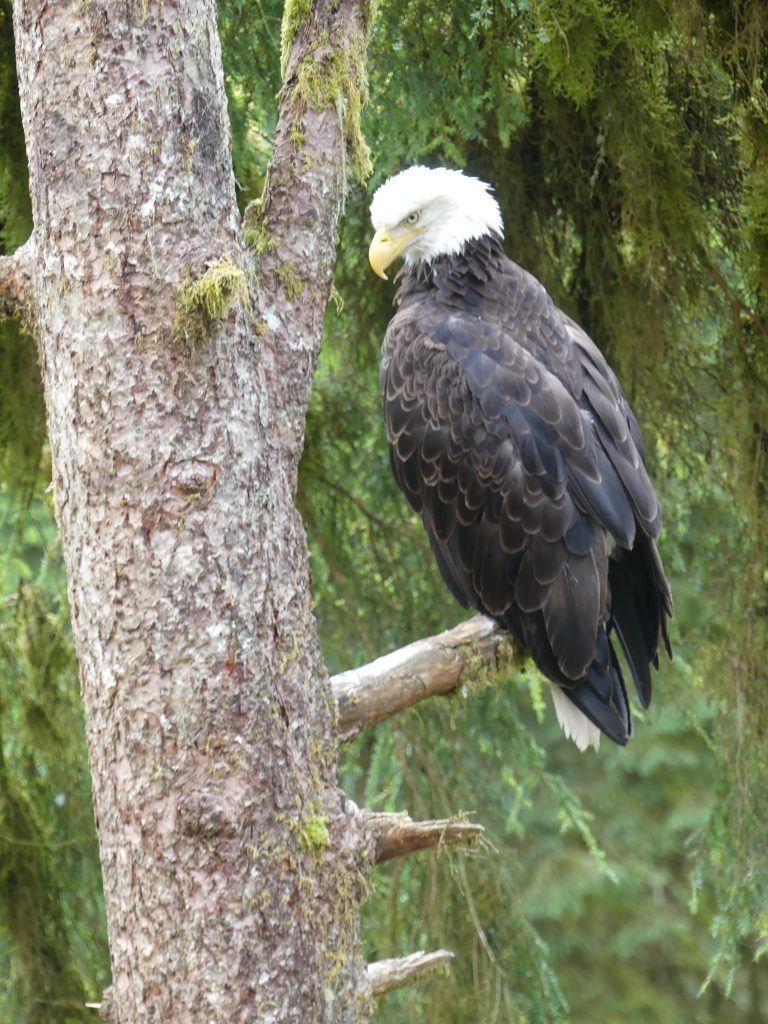 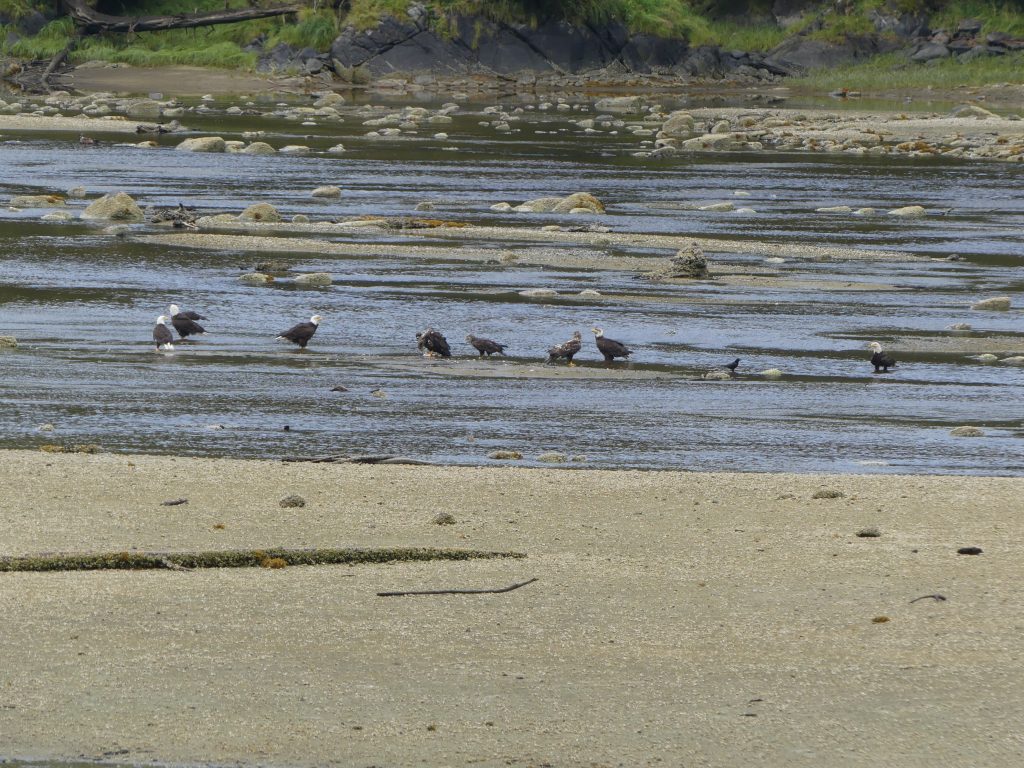 Assemblage of eagles at Anan Lagoon 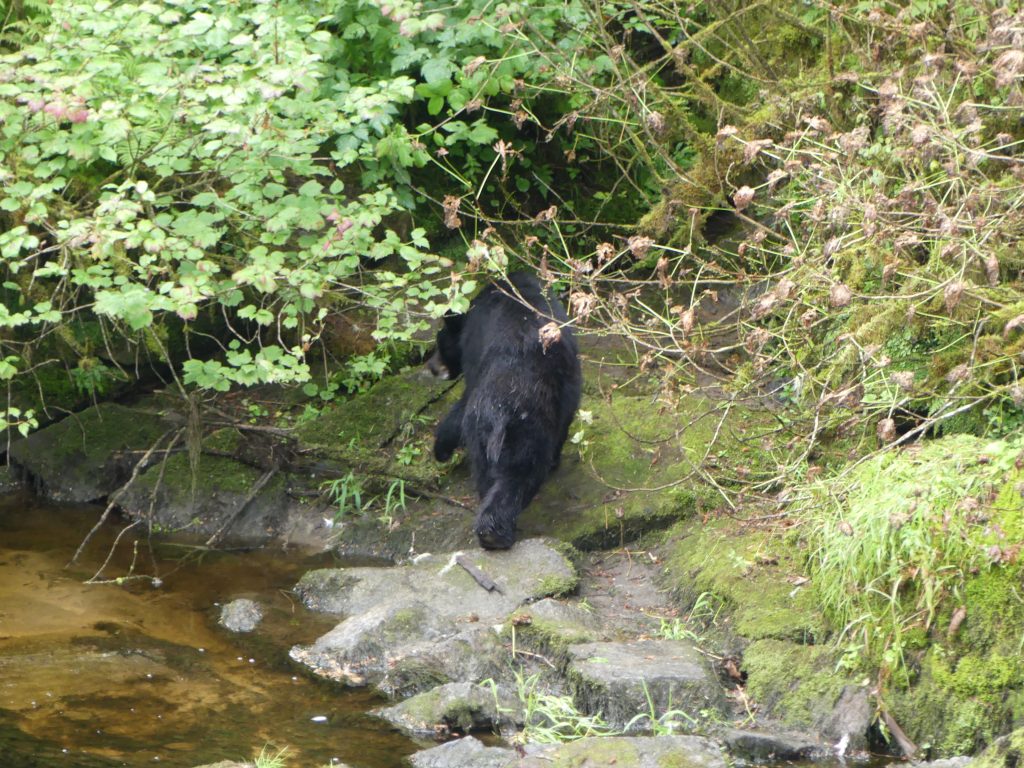 Black bear, heading for the woods 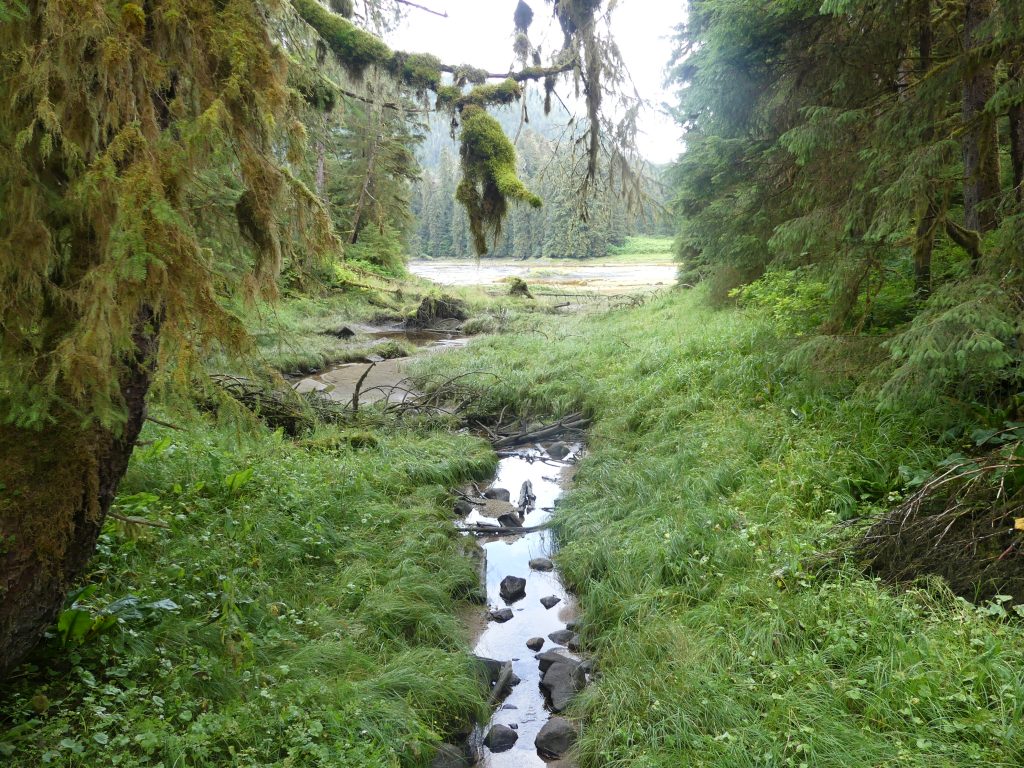 Then we got back on the water—and met more wind. We had intended to go from Anan Bay to Thorne Bay, with a seven-mile crossing of blustery Clarence Strait. But the weather was from the south, and forecasters were calling for 15- to 20-knot winds in the strait for the next four days.

So, rounding Lemesurier Point into Clarence Strait, we stuck close to the eastern shore, heading south into a four-foot chop, and ducked into the protected harbor of Meyers Chuck. 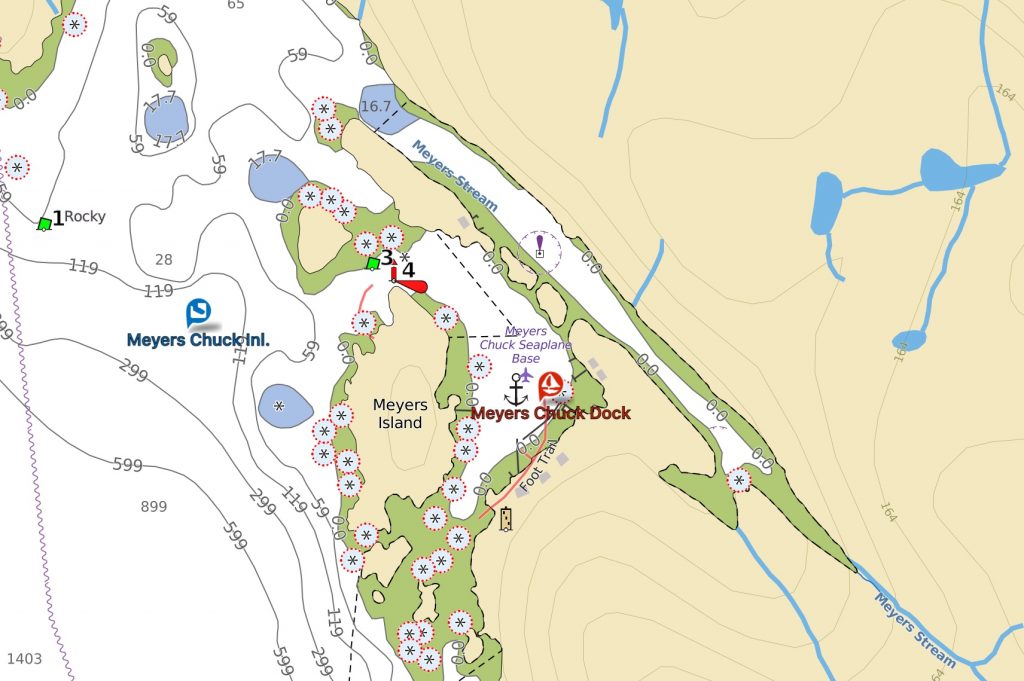 Meyers Chuck, refuge from the storm

The next morning, as she had on the outbound leg of Osprey’s voyage, legendary Meyers Chuck baker Cassy brought fresh, homemade cinnamon buns right down to the boat.

But there wasn’t a minute to spare. It looked like we had a very brief weather window, maybe a couple of hours, before Clarence Strait got rough again. So, munching on Cassy’s cinnamon rolls, we scooted out of Meyers Chuck and ran, 32 miles through heavy chop, down to Bar Harbor, in Ketchikan.