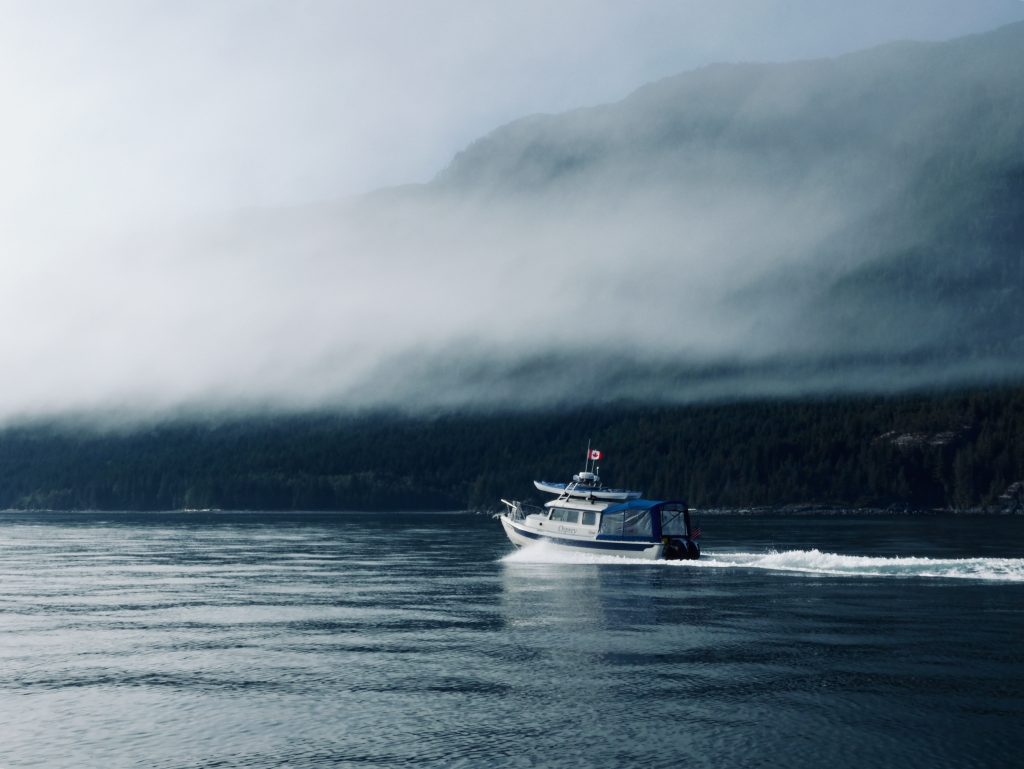 WE GROPED THROUGH THICK, THICK FOG for 20 miles, inching our way down the infamous Johnstone Strait, with a 3-knot current against us. Most of the time, Harvey’s boat was out in front while I tried to keep him in sight—no easy task with visibility often less than two boat lengths.

Using radar and AIS—a technology which shows the position of boats equipped with a special transmitter—we were able to gauge the location, heading and speed of other vessels traveling in both directions along the 60-mile-long channel. Harvey radioed approaching boats, to discuss how we’d pass each other. “Green to green,” keeping their starboard, or right side, to ours; “red to red” to pass port to port.

“How thick is the fog where you are?” Harvey would ask the other boat.

“Same here, hard to see anything. Have a safe trip.” 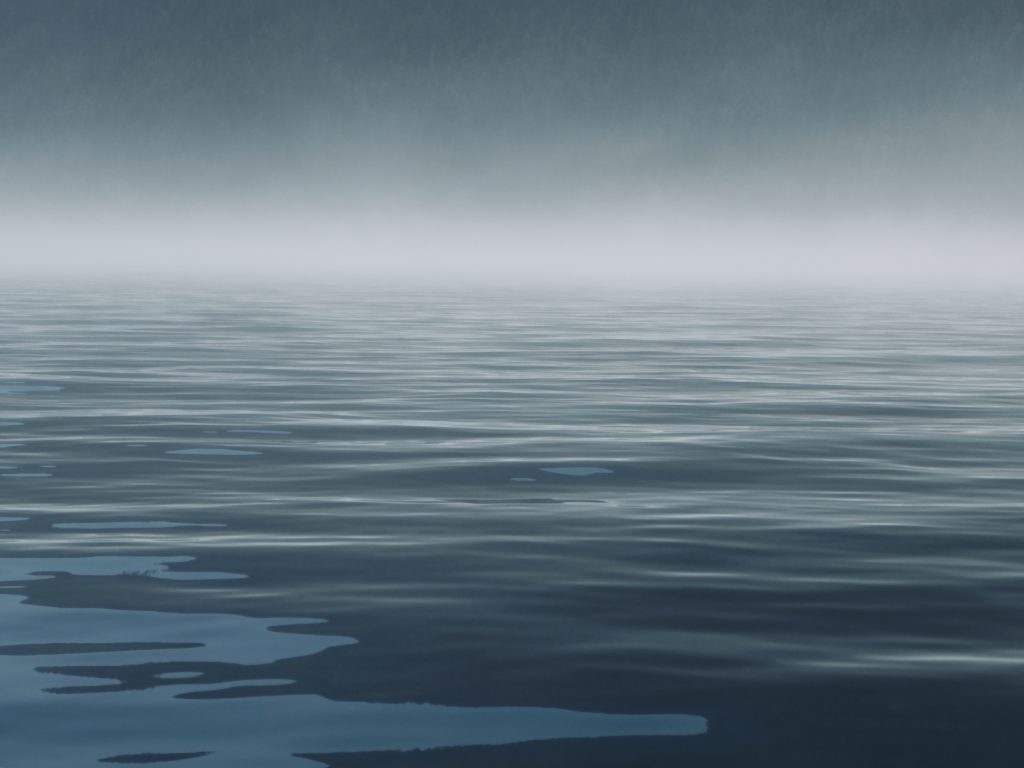 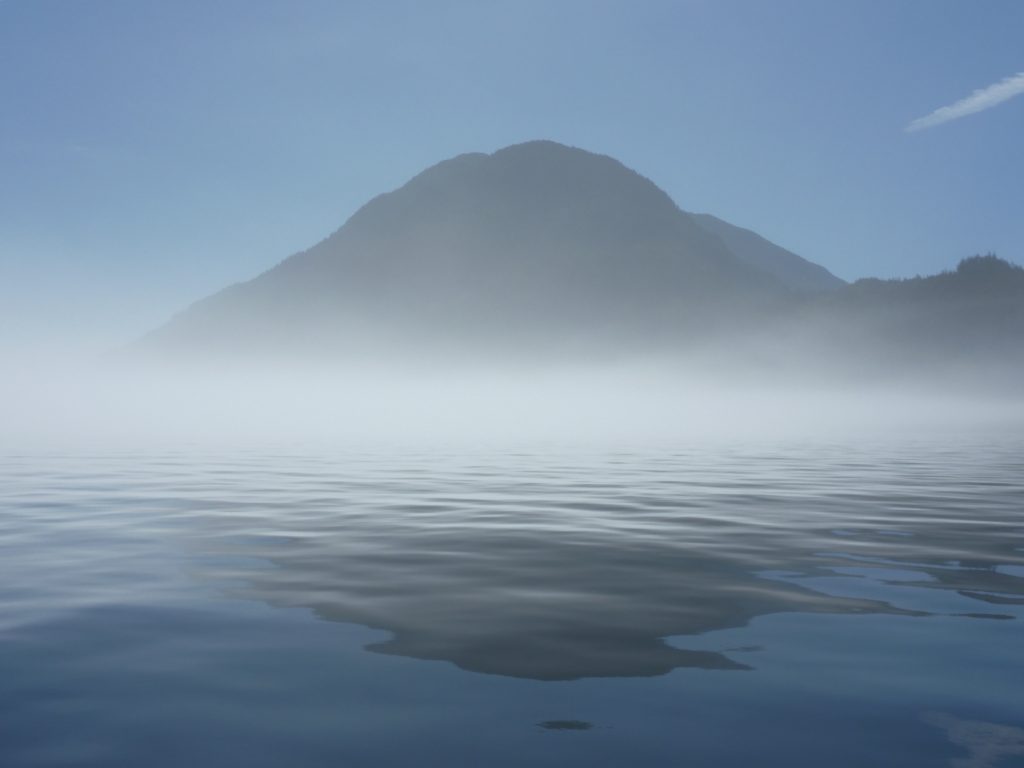 When traveling in fog, you try to use all of your senses. You stare intently ahead, hoping something won’t suddenly materialize out of the murk, while simultaneously watching the navigation screen for radar blips and AIS markers. You sniff for the smell of nearby land. And you listen—for the thrum of approaching engines, the sound of waves breaking on a reef, the clang of bell buoys, for other boats’ fog horns.

Sleepy C and Osprey are equipped with automatic horns, which can be set to sound a warning every two minutes. I had used mine in dense fog several times on my trip, taking some comfort knowing other boats could at least hear my approach. But several days before we reached Johnstone Strait we’d tested our horns—at what distance could they really be heard?

The results were dismaying. We had hoped the horns would be very loud—audible at least a mile away. When put to the test, though, we learned they couldn’t be heard until the two boats were just a few feet apart.

In the two weeks before we entered Johnstone Strait, Harvey and I had been traveling around the Broughton Archipelago. My understanding of this area was greatly enhanced by a visit to the homestead of Billy Proctor, a legendary fisherman and logger-turned-environmentalist. Billy, who will be 85 this October, has been working for years to restore wild salmon runs that were destroyed by overfishing and horrible environmental practices including clear-cut logging, blanket spraying of pesticides, and the introduction of open pen-net salmon farms on an industrial scale. 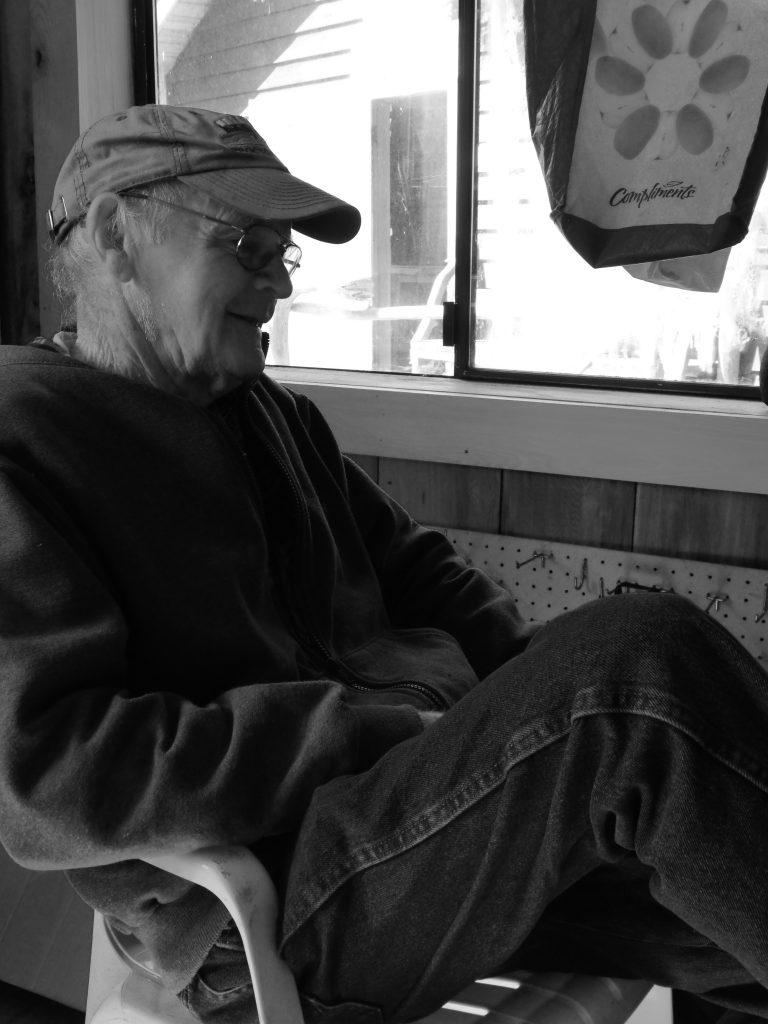 In his autobiographical book (highly recommended) Heart of the Raincoast: a Life Story, co-authored by renowned naturalist Alexandra Morton, Proctor talked about the destruction he has seen over the years:

In 1957, the BC Forest Service did an aerial spray of the north end of Vancouver Island. They sprayed from Blinkhorn Peninsula in Johnstone Strait to Cape Scott, Nigei Island and Hope Island. They sprayed with DDT and they did it in May, just when all the fry and smolts were leaving the rivers. The reason they sprayed was to kill a bug that was killing spruce trees. I was in Goletas Channel on my way home from Bull Harbour when they were spraying Nigei Island. They used two big four-engine planes and they had a thousand gallons of DDT in each plane.

There were holes along each wing and as they went there was a fog behind them. This went on for a week or more. There were stories of people with wheelbarrows full of dead tiny fry from the banks of the Nimpkish River. After that, there were no big runs of coho or springs to the Nimpkish River.

… Traditional fishing grounds were barren and who was to blame? Loggers were damming streams, preventing salmon from going upriver, and clear-cut logging was killing eggs on the spawning beds. Salmon eggs incubating in gravel need a constant flow of water to survive, and when a hillside is clear-cut, the soil washes downhill with each rainfall, clogging the little spaces between the pebbles and smothering the eggs.

Clear-cutting also warms river water, which is deadly to the cool-loving salmon. Pesticides were flowing into the creeks, poisoning juvenile fish. Relentless, increasing fishing pressure meant fewer and fewer salmon were returning to these damaged rivers, further decreasing survival. No one knew what was happening to the fish once they were out to sea. Warm currents, lack of food and increased predation kill salmon where we never see it.

What is amazing, and infuriating, to me is that these ruinous, backward, and unsustainable—stupid—practices continue to this day, aided and abetted by the B.C. and Canadian governments. In the Broughtons we passed through channels which for majesty would rival Alaska’s famed Misty Fiords National Monument—were it not for mountains vandalized by fresh clearcuts, mile after mile, with large Atlantic salmon farms seemingly around every bend.

Here’s some of what we saw (all uncredited photos on this website by Andy Ryan): 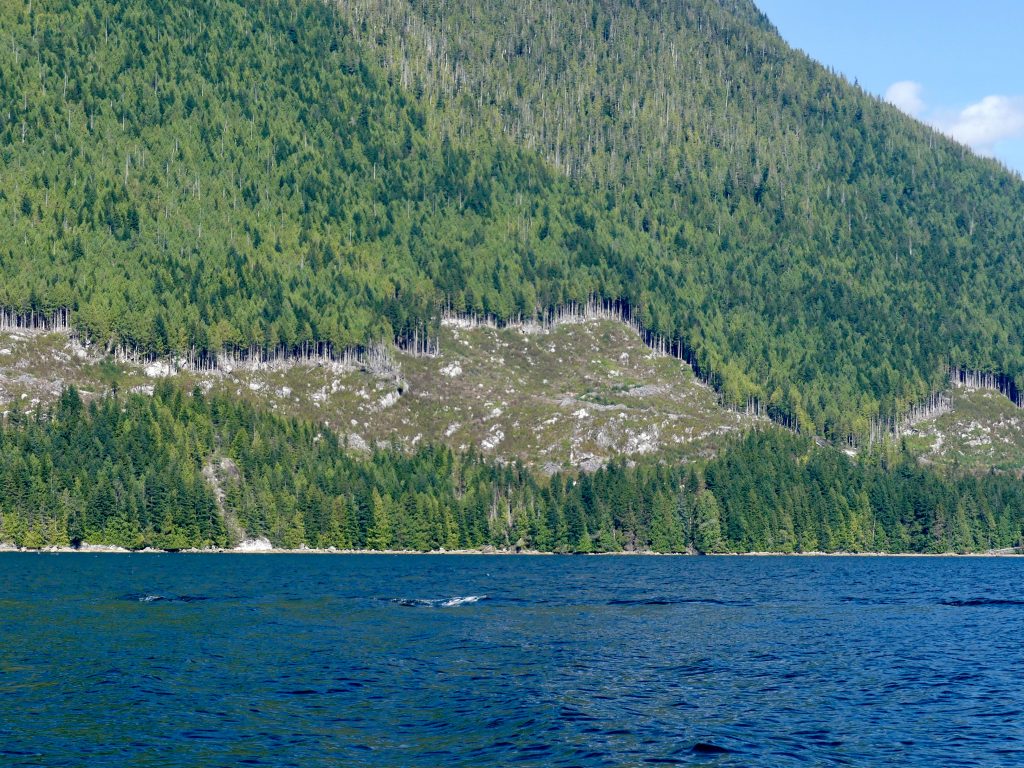 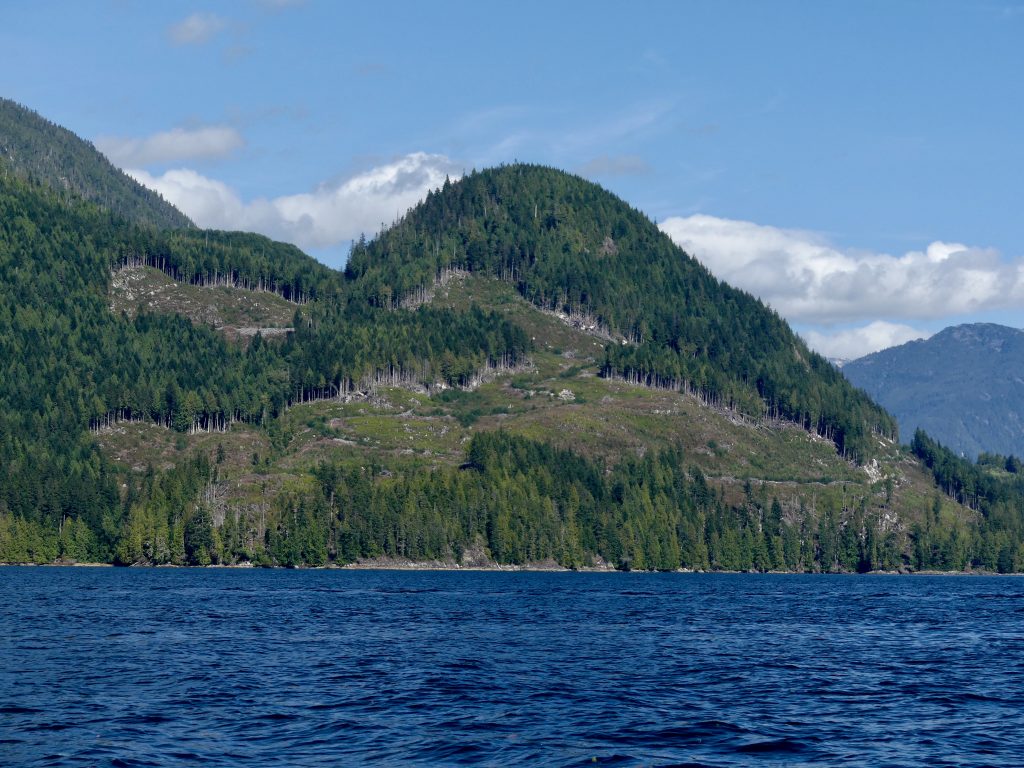 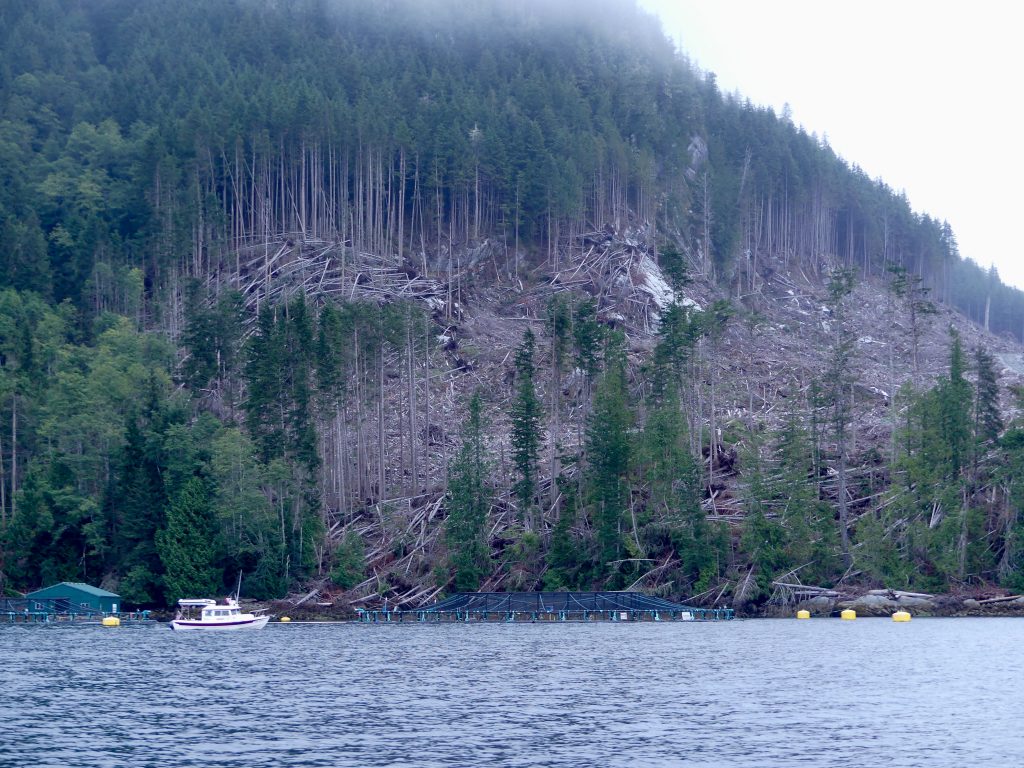 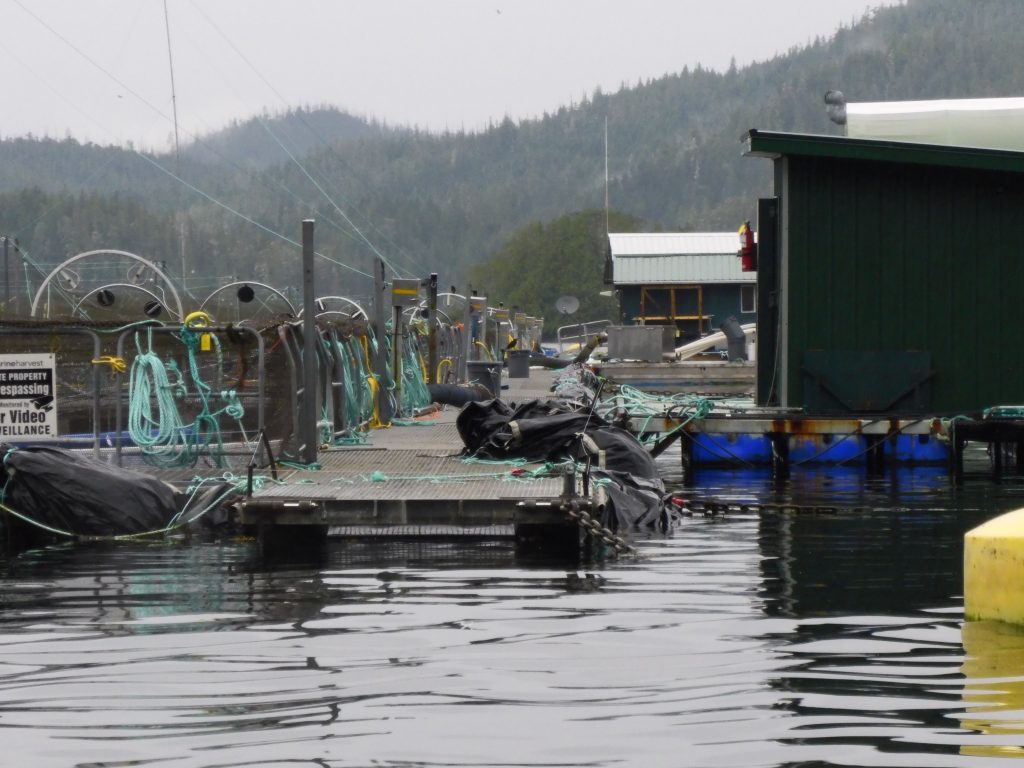 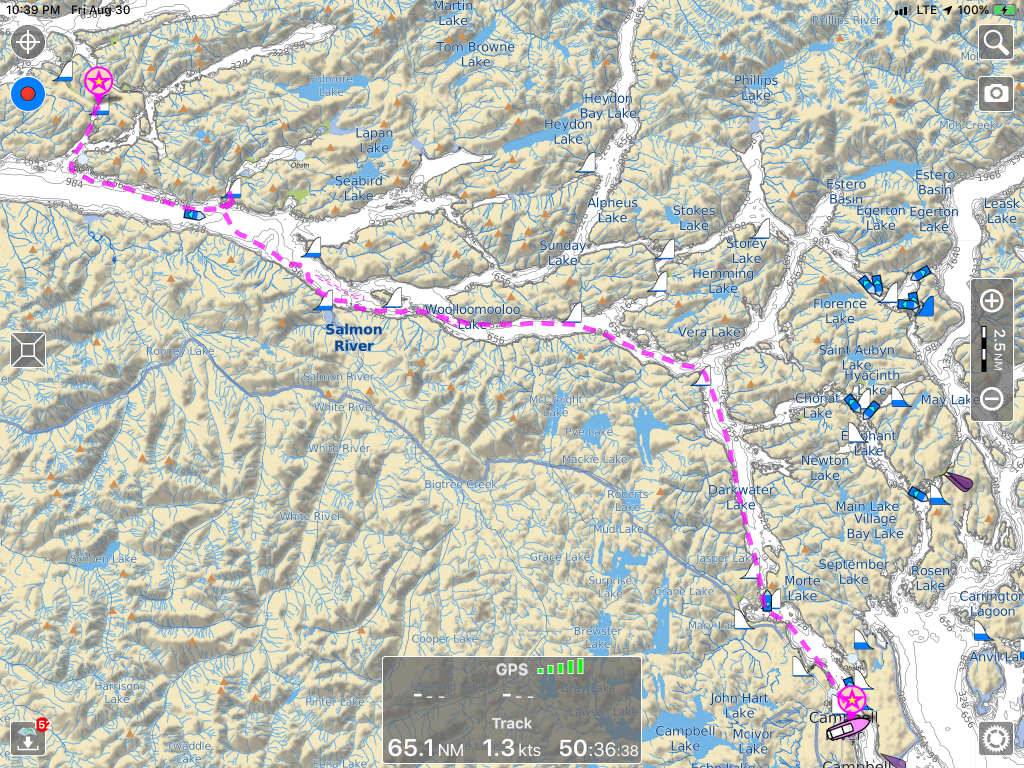 After four hours the fog in Johnstone Strait began to lift, and the shoreline slowly emerged. We could see again. The current had turned, going with us, and we were able to bring our boats up on plane and speed down the channel to Seymour Narrows. We got there an hour before the peak of the 14-knot ebb and rode the tide through churning rapids down to Campbell River. 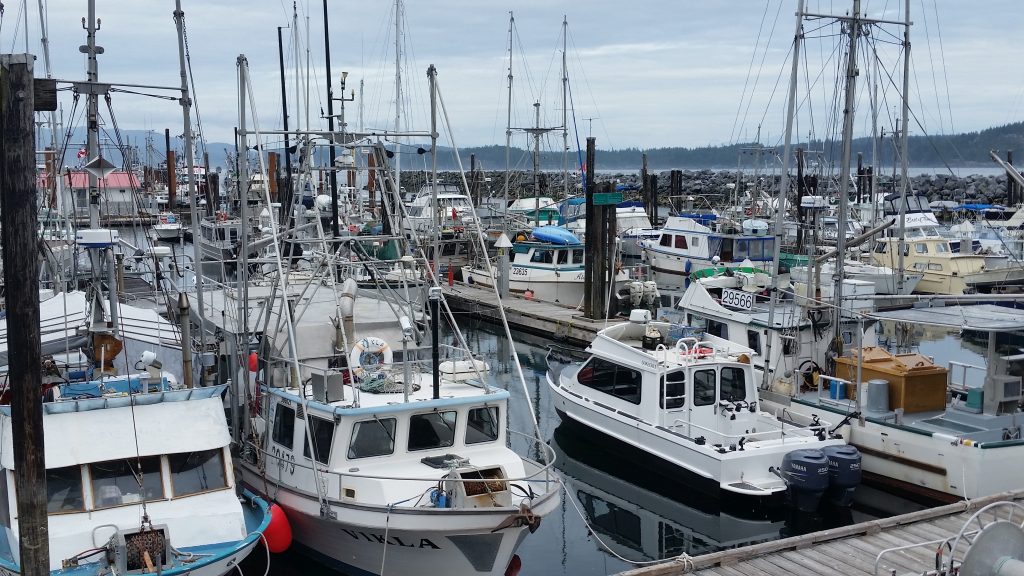 The salmon trolling fleet in this pretty town has been tied up at the dock all summer. Not enough fish for commercial openings, and no one can say exactly why. It could be the massive landslide that closed the Fraser River to fish passage earlier this year. Some say it could be Japanese drift-net fishing once again interdicting returning salmon. Or it could be the things people like Billy Proctor and Alexandra Morton have been warning us about—fish farming, logging, mining, industrial-scale application of pesticides, fertilizer runoff, loss of habitat, culverts and dams obstructing salmon migration routes.

All of these things are within our power to change. As the old Pete Seeger song goes, “I swear it’s not too late.”