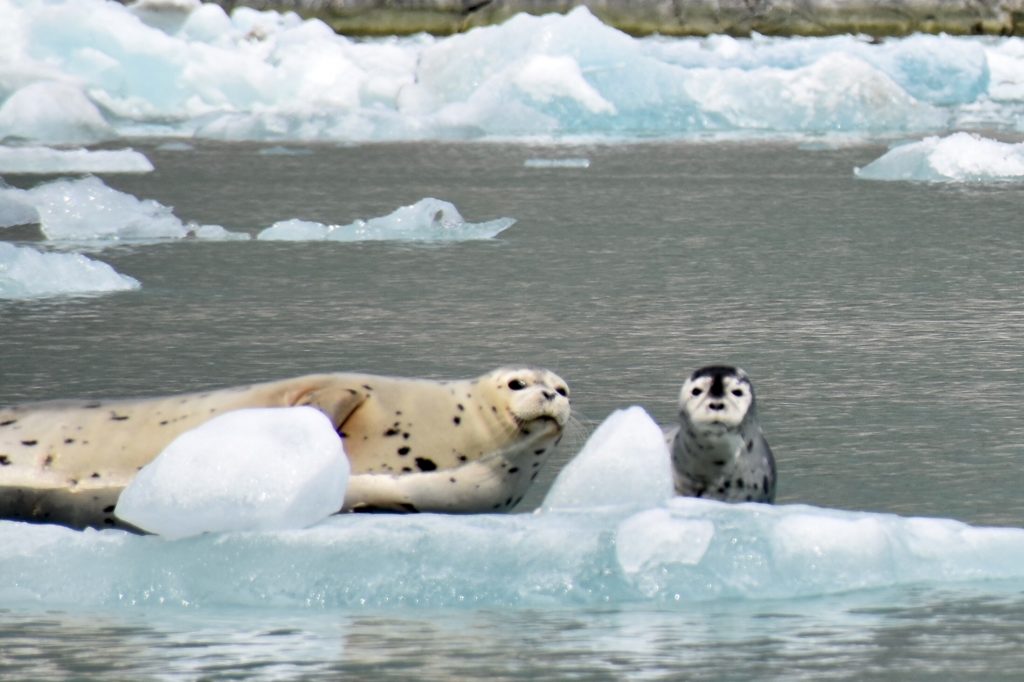 ALASKA’S FAUNA WERE ON FULL DISPLAY as the Osprey made her way to Juneau from Wrangell. Brown bears, seals, eagles and ice animals practically posed as we went by, a photographer’s dream.

We stocked up in Petersburg, a scenic, orderly fishing town proud of its founders’ Norwegian and Native heritage. Sally Dwyer, a longtime civic leader, gave us a fascinating VIP tour. 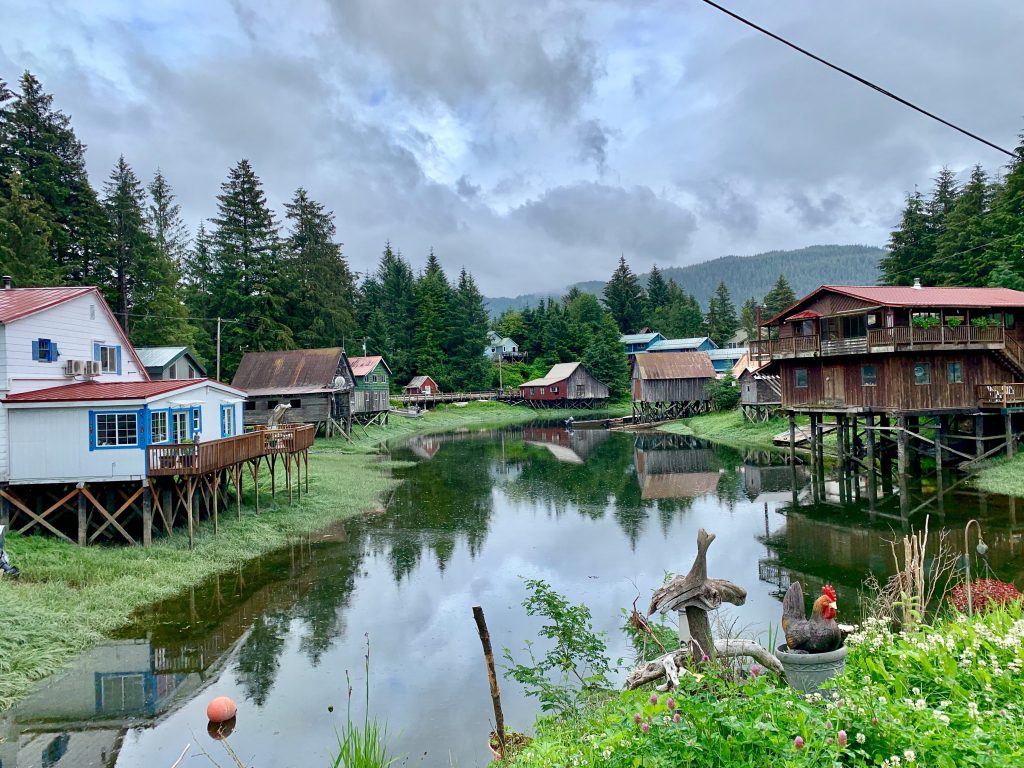 For the next five days we cruised into the wilderness to see animals, snow-capped mountains and glaciers, on a blessed run of sunny days. At night we anchored in protected coves, after reading reviews by other mariners and gingerly sounding the surrounding depths.

Entering Stephens Passage from Frederick Sound we crossed a virtual whale highway. We heard spouting and saw dozens of plumes in all directions, and from afar glimpsed a few tails reflecting sunlight as they flopped into the water.

Near shore, eagles were constantly overhead. 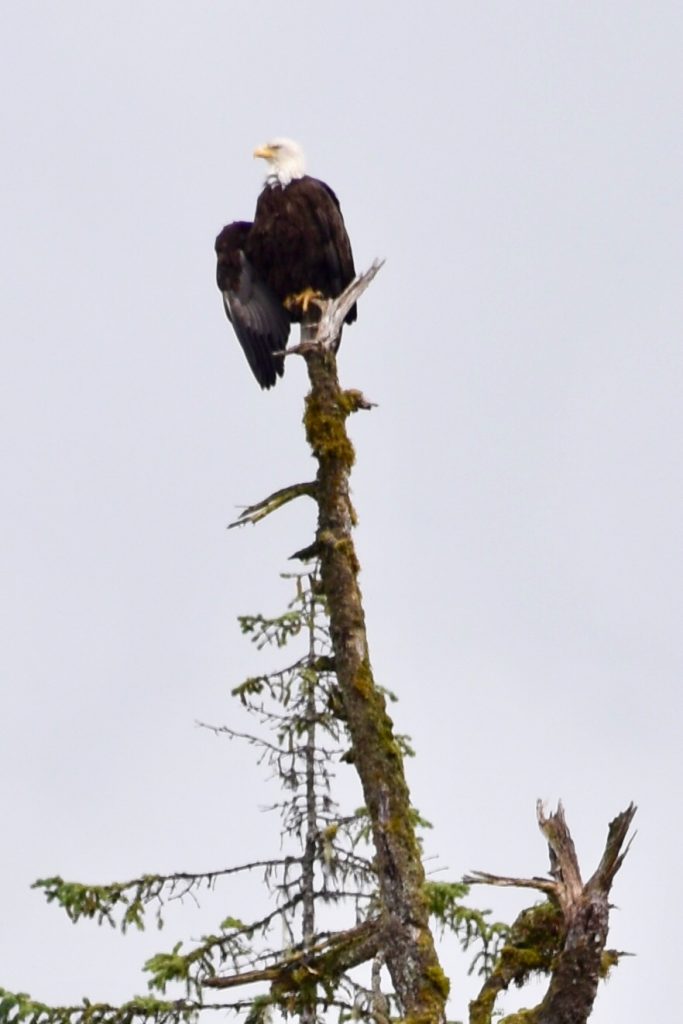 At Hokham Bay we first encountered jagged icebergs calved from glaciers at the ends of Tracy Arm and Endicott Arm. Gleaming in the morning sun, some odd shapes suggested birds, lizards or dragons. 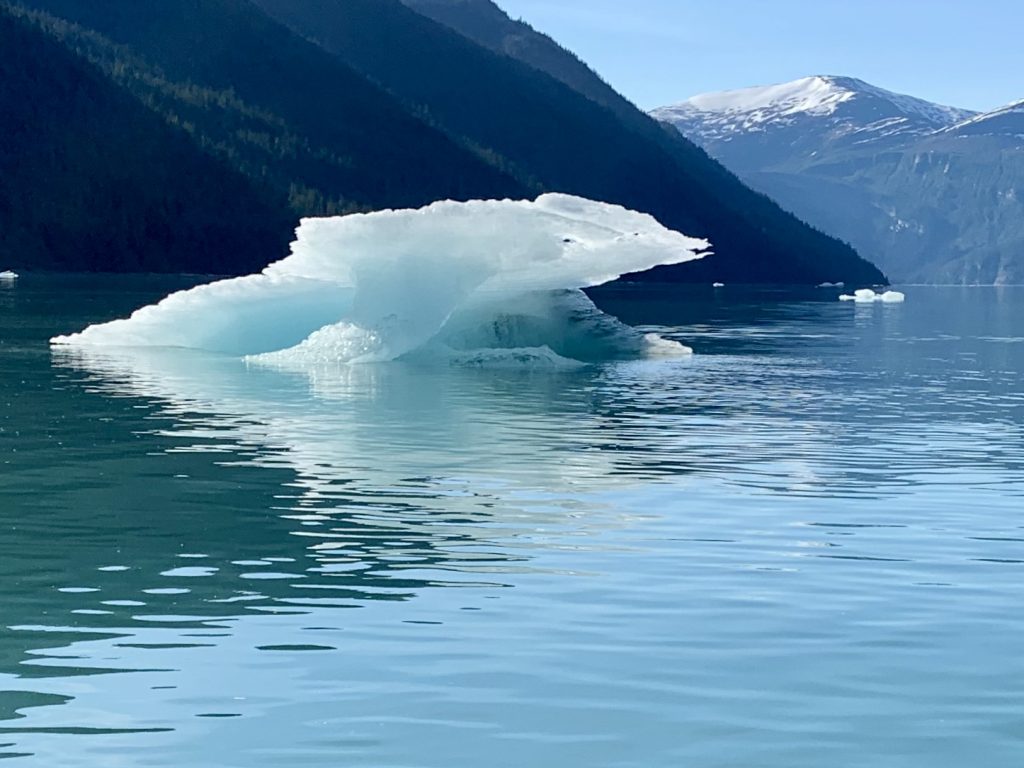 Ice menagerie: What manner of creature is this? (Bill Ryan)

Rising at 4 a.m. to meet the tide, we made our way up to the challenging entrance of Ford’s Terror inlet—named for a frightened sailor who navigated the roiling rapids in a rowboat—and at slack water went through carefully, into a secluded paradise enclosed by stunning high cliffs and waterfalls. No gargantuan cruise ships here. 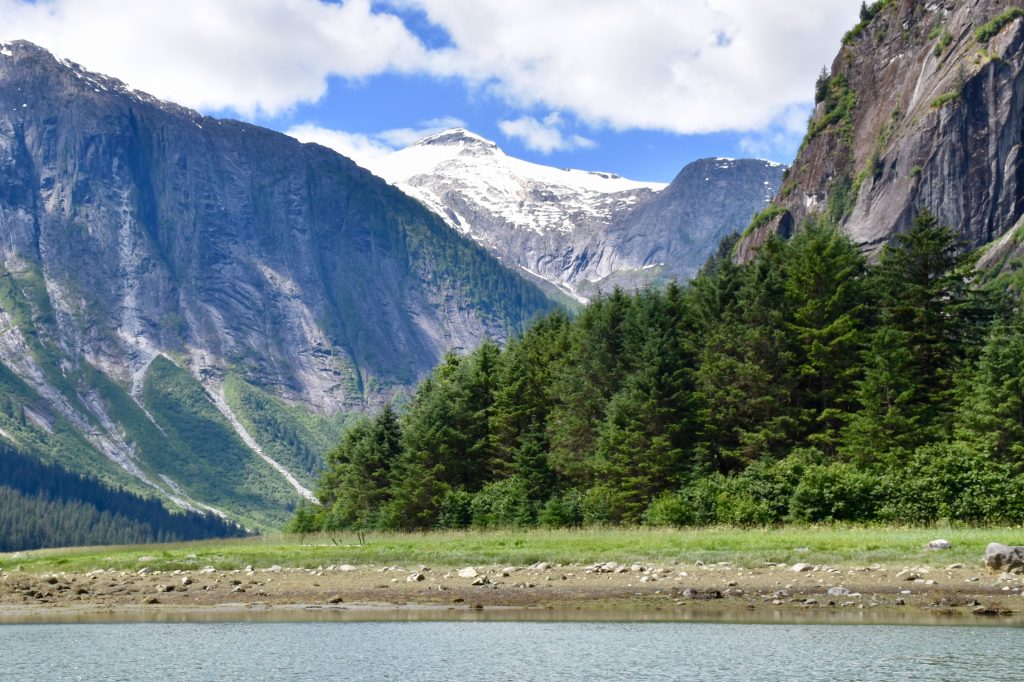 View from our anchorage at Ford’s Terror (Bill Ryan)

We stayed long enough for two short kayak rides to a beach at one end of this idyllic basin. Rounding a bend, I suddenly came upon a mama brown bear and two small cubs digging for crabs or clams. After backing off to avoid notice, I took pictures from the kayak, rueing my lack of a longer lens. The mother and cubs then swam across a rising creek and vanished in the woods. 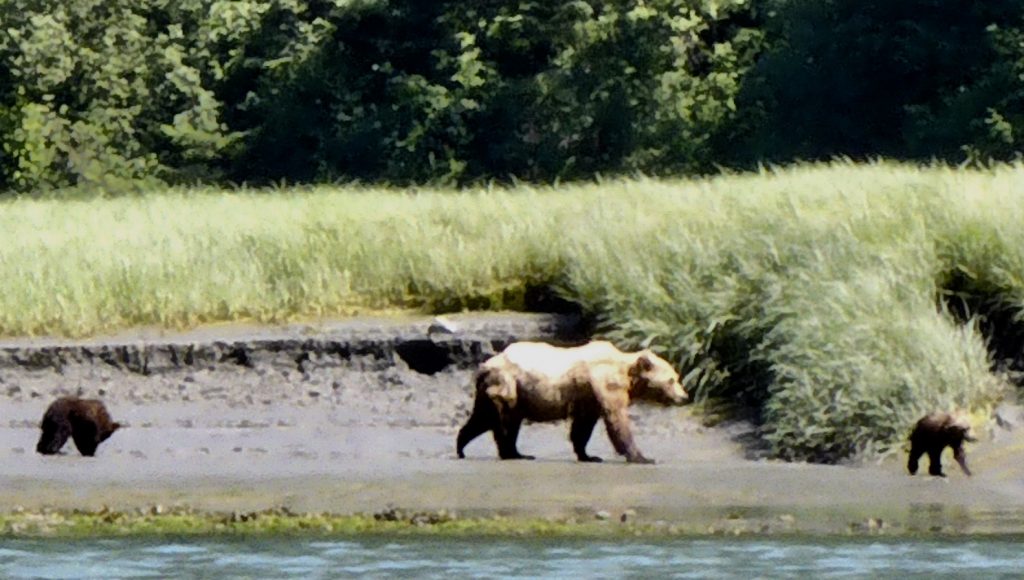 When the tide was higher, I paddled back to their digging site, now an island, and found bear tracks and multiple holes in the sand. 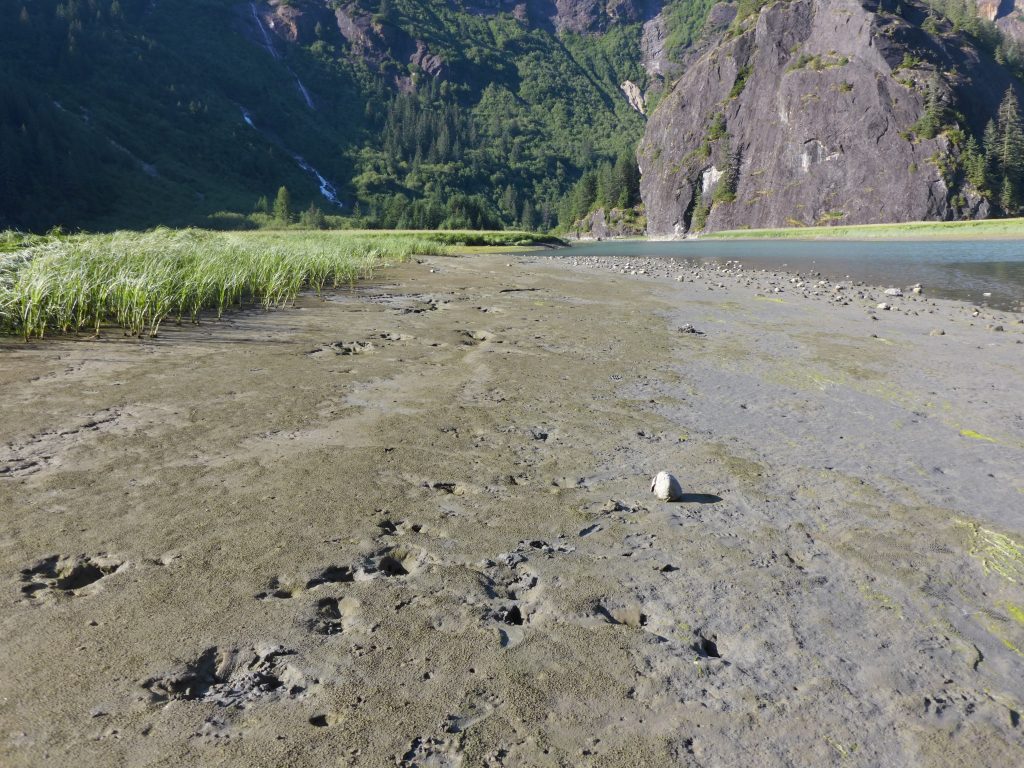 The next day we continued up Endicott Arm to Dawes Glacier, weaving through a maze of small icebergs. Seals basked idly on many of these floats. 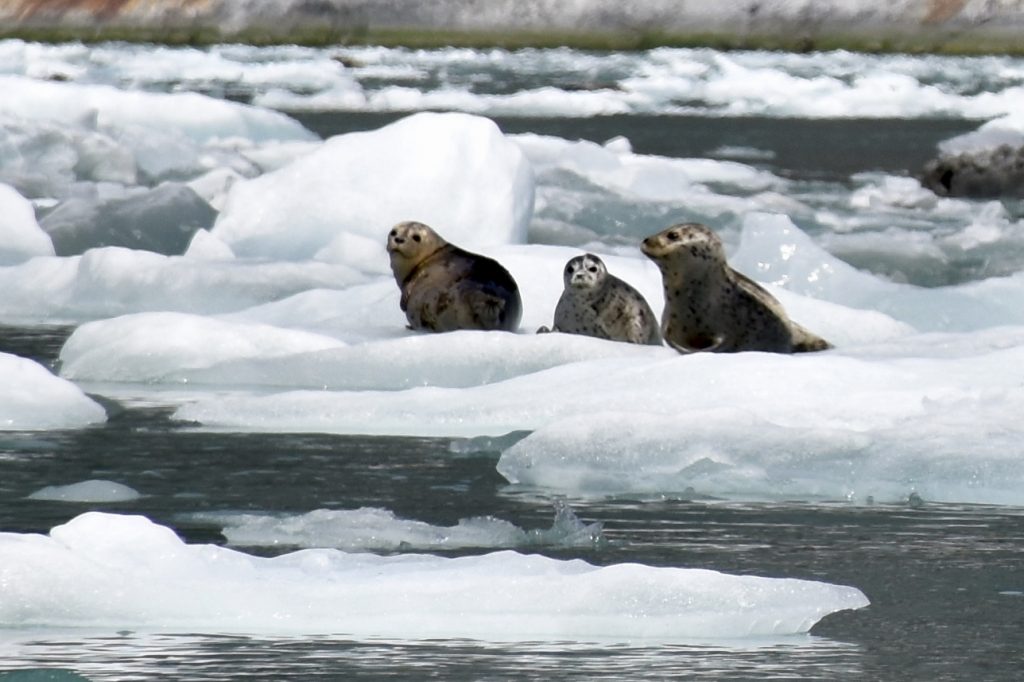 We got as close as we prudently could to the massive ice cliffs where the glacier meets the water, sharing the awing experience with kayakers from a swanky yacht. 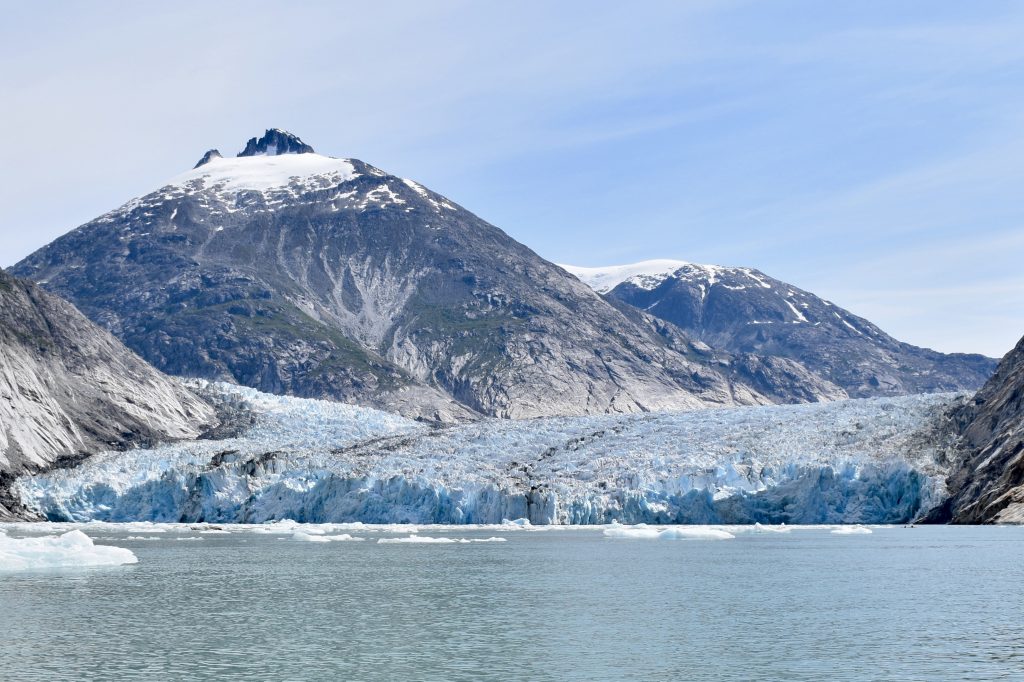 We anchored for the night near the entrance of Tracy Arm, another fjord famous for icebergs, sharing the cove with tour boats and pleasure craft. As we pulled in, we spotted a brown bear family walking along slowly along the shore, as I and other tourists in inflatable rafts snapped pictures. Then they saw us and slipped behind the tall grass. 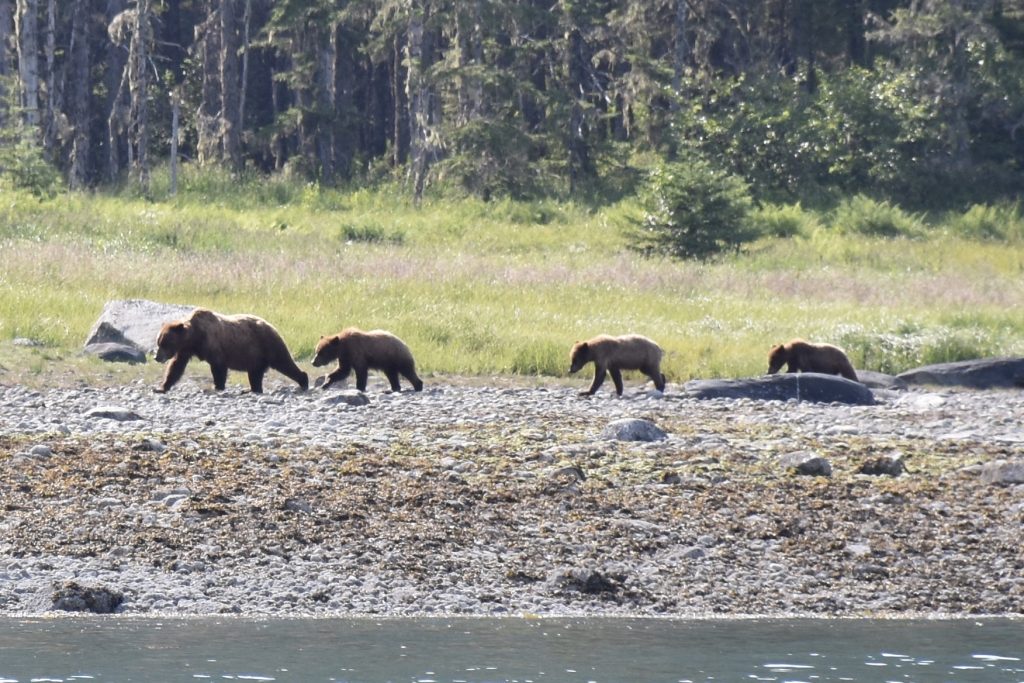 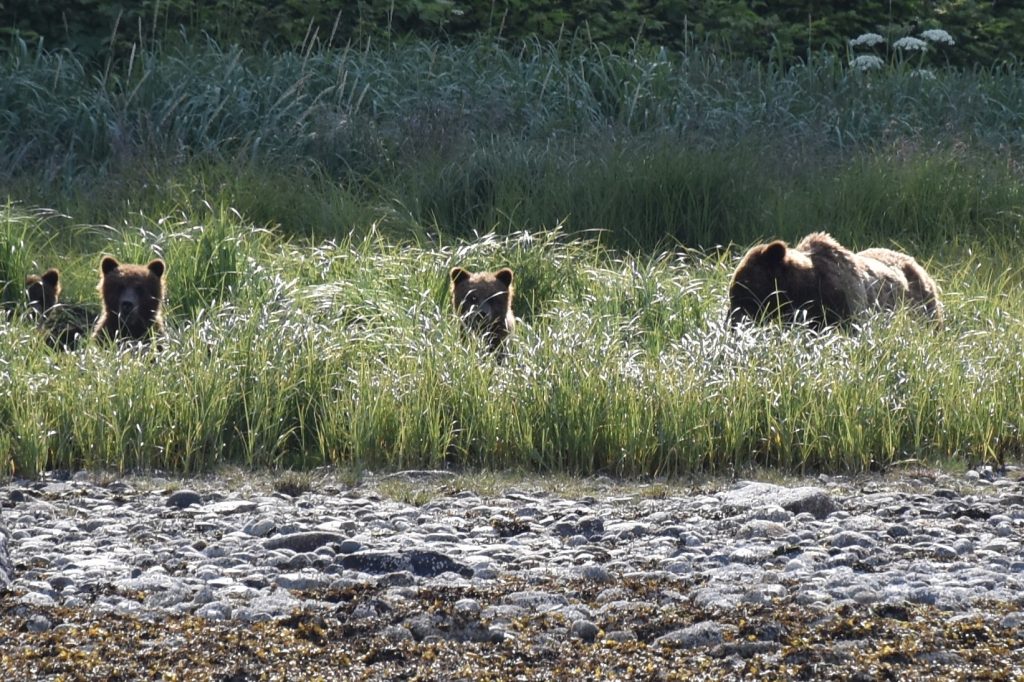 Now they see us (Bill Ryan)

A trio of eagles watched from a rock as we pulled out into windy Stephens Passage, where we faced two- to three-foot waves from several directions. Our ride toward Juneau was bumpy but manageable, and the mountains on all sides were magnificent. 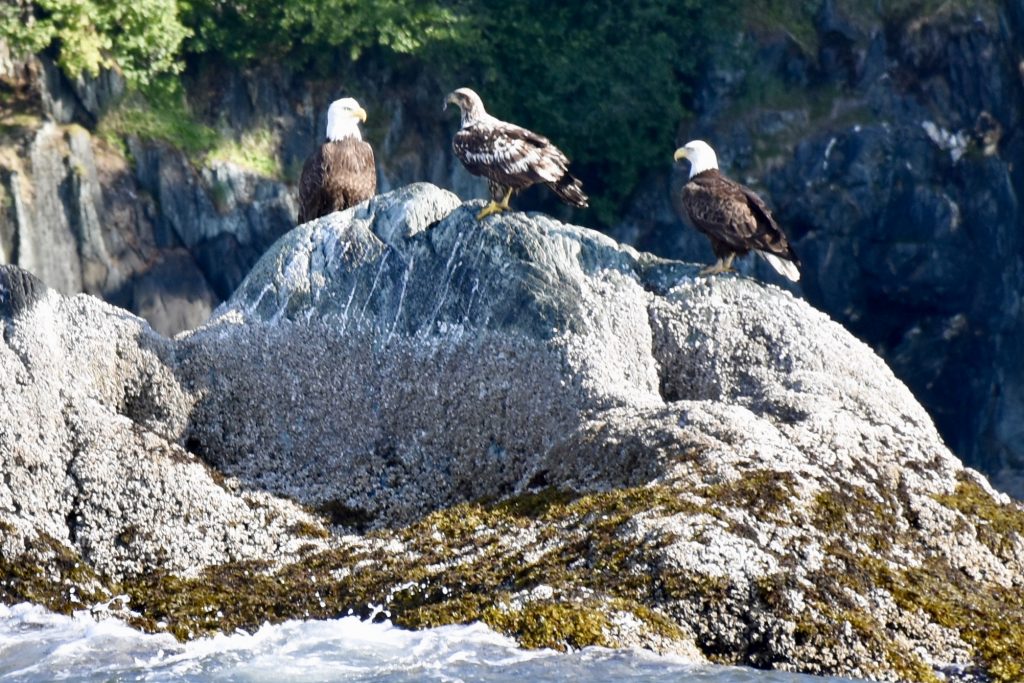 On our last night out in this leg of Osprey’s journey we anchored by a beach in a tranquil cove off Admiralty Island, reputed home to North America’s largest brown bear population. No creatures were sighted onshore, but in a sunset that lasted past midnight we listened to a nearby whale’s spouting and splashing, sounds that boomed across the water. Suddenly there was a commotion, and close behind our stern up popped two seals swirling in a close embrace. 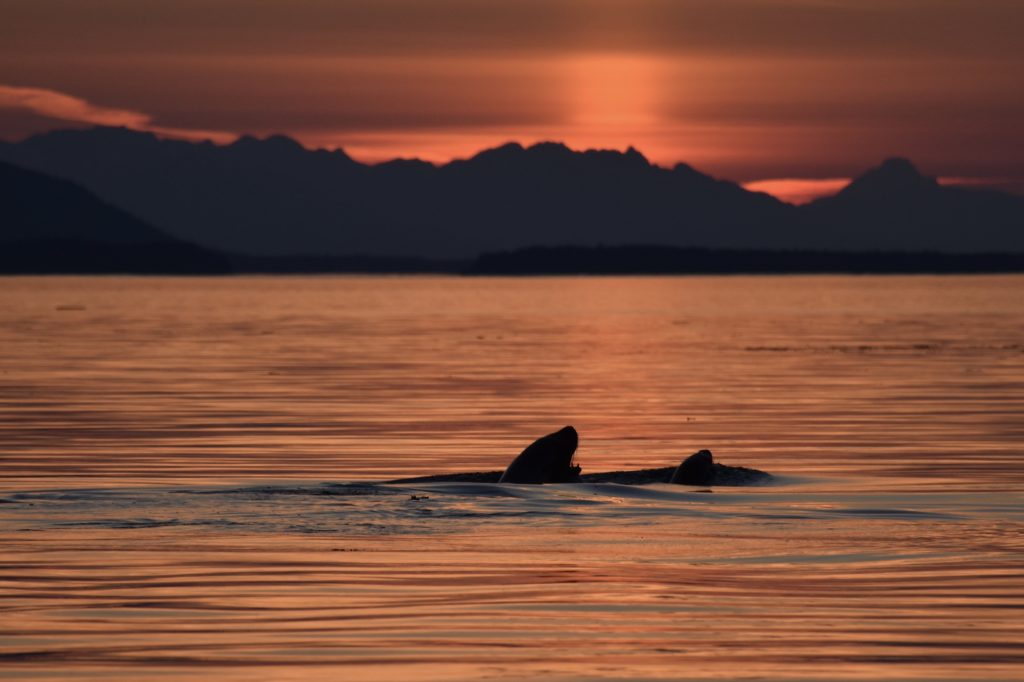 After a couple of days’ respite and a crew change in Juneau, brother Andy and his cozy C-Dory will head off to the natural glories of Glacier Bay. Bon voyage. Quelle aventure.

Posted in Uncategorized
← Wrangell and the boat next doorAlaska’s capital, Juneau →