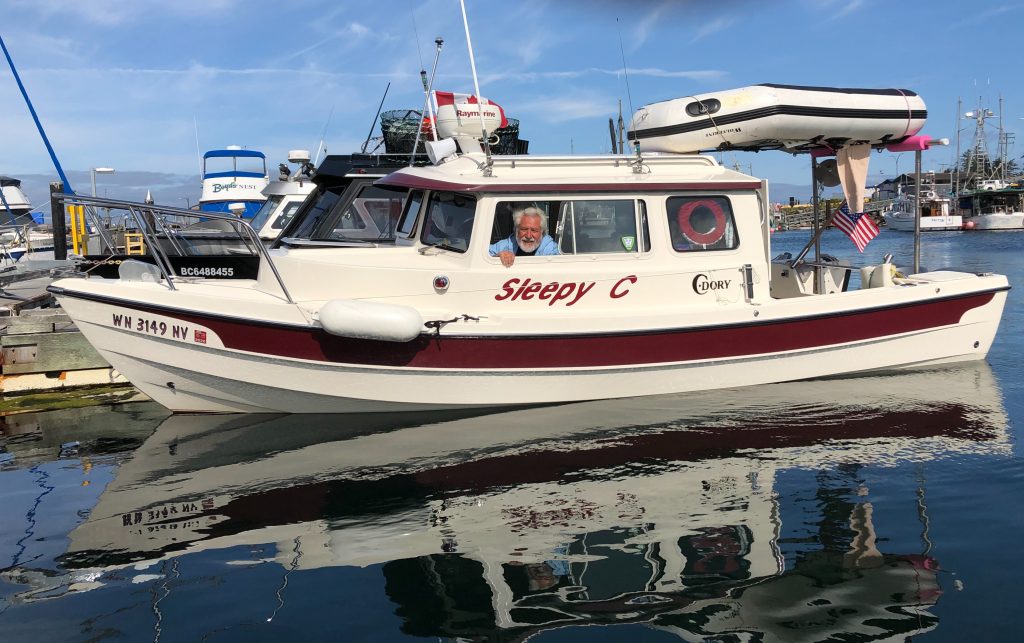 MY FRIEND HARVEY HAS JOINED ME in Port McNeill. Harvey is another C-Dory owner, and for the next couple of weeks we’ll be buddy-boating through the Broughton Islands archipelago, at the eastern end of Queen Charlotte Strait.

Harvey brought Sleepy C up from Sequim, Wash. two weeks ago. Since then, he has been helping the owner of the Port Harvey (no relation) Marina, Gail Cambridge, get her possessions packed up for her move back to Alberta. Gail’s husband George died suddenly, a year ago, and Gail can’t run the marina by herself.

Harvey had come to know the Cambridges over a couple of summers cruising in the Broughtons; he became a more active supporter of the little mom and pop marina last year when a local man sought to have part of the bay rezoned, to permit the operation of a noisy, ugly shipyard directly across from the marina.

The Cambridges believed the industrial operation would destroy the solitude and quiet of their beautiful little cove. And their business along with it.

I followed the rezoning process from afar, reading local newspaper stories online and listening to first-hand accounts from Harvey, who drove up to Port McNeil to participate in the hearings. For a number of years I worked as a newspaper reporter, covering local, state and federal government—and from what I could see, in the pro-development environment that seems to prevail up here, the deck was stacked against the Cambridges. They never had a chance.

At one point, the marina’s dock sank, for no apparent reason. Harvey is convinced it had to have been sabotage.

On May 15, 2018, despite considerable local opposition, the Regional District of Mount Waddington adopted Bylaw 895, rezoning the Cambridges’ neighbor’s land—from “rural” to “marine industrial.”

In a news release sent out after the Mount Waddington District’s decision, George Cambridge said he would appeal the ruling.

George set up a GoFundMe page in an attempt to raise the estimated $80,000 cost of fighting the ruling … and then everything  ended for the Cambridges and the Port Harvey Marina. Three months after the zoning decision, George died in his sleep of an apparent aneurism.

And so, for the past couple of weeks, Harvey and a small band of friends have been helping Gail Cambridge pack up the memories of a long, happy marriage. A water taxi was scheduled to take her away this week. Harvey and I have plans to stop off at the now vacated marina, for a last look, on our way back from the Broughtons.